The latest episode of AVL Food Fans is in the can! It’s our 15th episode and it’s another great one! Chef Joe and I are joined by special guests Chef Peter and Martha Pollay, husband and wife co-owners of Posana restaurant on Biltmore Ave. We discuss their farm-to-table philosophy, the history and decor of their restaurant, and of course, their 100% gluten free kitchen! Click below to hear more…

We are also joined by Lucy Murphy from The Asheville Independent Restaurant Association again, who helps us deliver the Food News in the beginning of the show.

Lucy is all about that AIR Passport!

At the end of the show Joe and I talk about trademark and copyright issues as they pertain to local restaurants and brewers. Innovation Brewing, Hopey & Company, Bhramari Brewhouse, and Banks Ave. are all mentioned, as well as my own legal hassles with Kraft Foods Inc, who sued me in 2002 for something called tarnishment.

Screen shot taken from the Banks Ave. (nee Public School) FaceBook page, but when the owner called me, and I asked him point blank if they were actually sued, or if if they avoided a law suit by changing their name, he refused to answer, getting quite defensive and even belligerent about it!

I fought Kraft for a year in federal court, with the help of some very kindhearted lawyers, and the Comic Book Legal Defense Fund, and in the end we settled out of court. I complied to their demands, and they coughed-up $10,000 for a non-profit of our choice called the Freedom to Read Foundation.

I tried to make some valid points about copyright and trademark stuff on the show, but as usual, I’m an idiot, and this time I literally sputter, stammer, and blather incoherently towards the end… who gave this guy a microphone???

The points I was trying to make are…

• A “Cease and Desist” is essentially a formal request from one party to another, and not a legal document issued by a judge or a court, so try not to freak-out if you get one. You may choose to respond to it, or ignore it, or laugh in the face of the person sending it. Your reaction is entirely up to you, and most importantly, you are not required to comply.

• If you feel as though you are in the right, you can represent yourself for the first stages of the case. When Kraft sued me, I filed all my own initial papers by Googling stuff and doing a lot of cut ‘n’ pasting. When I did get some lawyers later on, they told me that my papers were surprisingly on-point and not much different from what they would have written themselves.

• Conventional wisdom is that The “Big Boys” have all the money, so you can’t ever win, but what became increasingly obvious to me as I battled Kraft for a year, is that their army of lawyers was costing them an ASSLOAD more money than my guys were, and I had financial help from a non-profit to boot. After 12+ months of paying “The Two Steves” (as I called the primary Kraft lawyers), plus all of the other corporate legal goons involved, they were looking at what I estimated in my head to be something like a $250,000 legal bill. They had a lawyer at one deposition who’s entire job was to stare malevolently at everyone else, including — especially — the deposed Kraft exec sitting in the hot seat!

• If you settle, get something! Don’t go down quietly. I was very loud about my court case while it was happening. I called the 6 o’clock news, I wrote press releases, I posted on line, a punk band in Chicago called the Busy Kids wrote a song about it, my awesome friends in Boston did a rock show benefit for me, my GF at the time was a documentary film maker, so she made one about the case that was even screened at film fests and stuff… my point is: No fucking wonder, after a year of THAT public relations nightmare, and the aforementioned lawyers’ fees, that Kraft was more than ready to ask if I wanted to settle out of court. I said sure, and asked for 10 grand. They said no. I asked them to give 10 grand to the Comic Book Legal Defense Fund. They said no. (Dicks) That’s when my lawyers and the two Steves hammered out a deal to give the money to a third party, a non-profit, one that we picked. Fuck you, Kraft!

• Do NOT sign a non-disclosure. One day towards the end of the settlement process, my lawyers called me in and told me that Kraft wanted me to sign a “non-disclosure” clause, which would essentially bar me from ever talking about the case in public. My guys asked me if I wanted to sign it, and then they watched me really close, in silence. It was weird. They didn’t give me any advice or opinions, they simply waited, eyeballing me with lawyery anticipation. I’ll never forget that moment. I gathered my wits and my courage and I said, somewhat timidly, “I think that non-disclosure clauses are unconstitutional and signing one would violate my right to free speech.” My lawyers were SO HAPPY to hear me say that, it was like I had just won on Jeopardy. They cheerfully agreed, slapping me on the back and such, so I didn’t sign it, and once again, Kraft had to suck it. NO MATTER WHAT: Do not sign away your right to tell your own story.

• In the end, nobody gets what they want, except the lawyers. Kraft paid out the ass to get me to stop doing something that never effected them in any way in the first place, and I had to stop doing the thing I was doing even though I had every right in my mind to continue doing it. Everyone was grumpy by the time we were done, but the lawyers probably cheered-up a bit when the big fat paychecks arrived.

Getting sued, or even being threatened with a law suit is unnerving to say the least, and the year I spent tangling assholes with Kraft was one of the worst periods of my life. As in: Not Fun. Here’s a comic I drew about it at the time. You can click on the panels to see larger sizes. 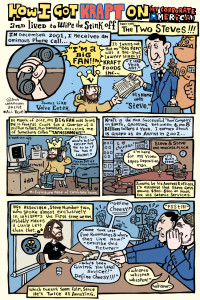 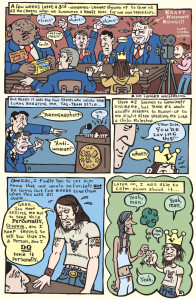 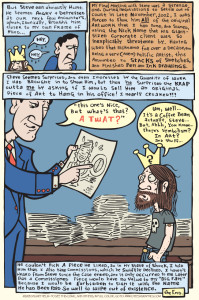 Anyhoo, I ain’t a lawyer, unfortch, so take my advice with a grain of salt. Mmm… salt.

Also, at the time, I literally had nothing to lose, so take that into account as well. No kids, no car, no house payments… no furniture… I was in a position where I could fight, because, I was like, “fuck it.” Not everyone can say fuck it, and I fully understand that.

I couldn’t have fought Kraft for as long as I did without the help of a lot of people including my Lawyers who were really nice to me, my friends, my room mate, my landlord, and my ex-girlfriend, and of course the CBLDF, which is just a fantastic organization.

Thanks to: Chestnut, Corner Kitchen Catering, The Corner Kitchen, Coffee Crate, Blue Ridge Restaurant Equipment, and Buffalo Nickel for their support, as well as to WPVM 103.7 The Voice for rebroadcasting our show every Friday at 5pm, and of course to our producer Matt (the angry-looking bald guy in the picture below) at ZaPow studios on Battery Park Ave right downtown. We love ya, Matt!

Stu Helm is an artist, writer, and podcaster living in Asheville, NC, and a frequent diner at local restaurants, cafes, food trucks, and the like. His tastes run from hot dogs and mac ‘n’ cheese, to haute cuisine, and his opinions are based on a lifetime of eating out. He began writing about food strictly to amuse his friends on Facebook.

“Possibly Turkey” – Where to Eat and Drink in Asheville on Thanksgiving Day
Stu Helm November 11, 2015

The Asheville nonprofit Our Voice holds its biggest fundraiser of the year with an online event Thursday, March 11, featuring …
Read More

Hello, Asheville! Here’s another Food Feed for you. The words and pictures below were originally posted to social media, mostly …
Read More