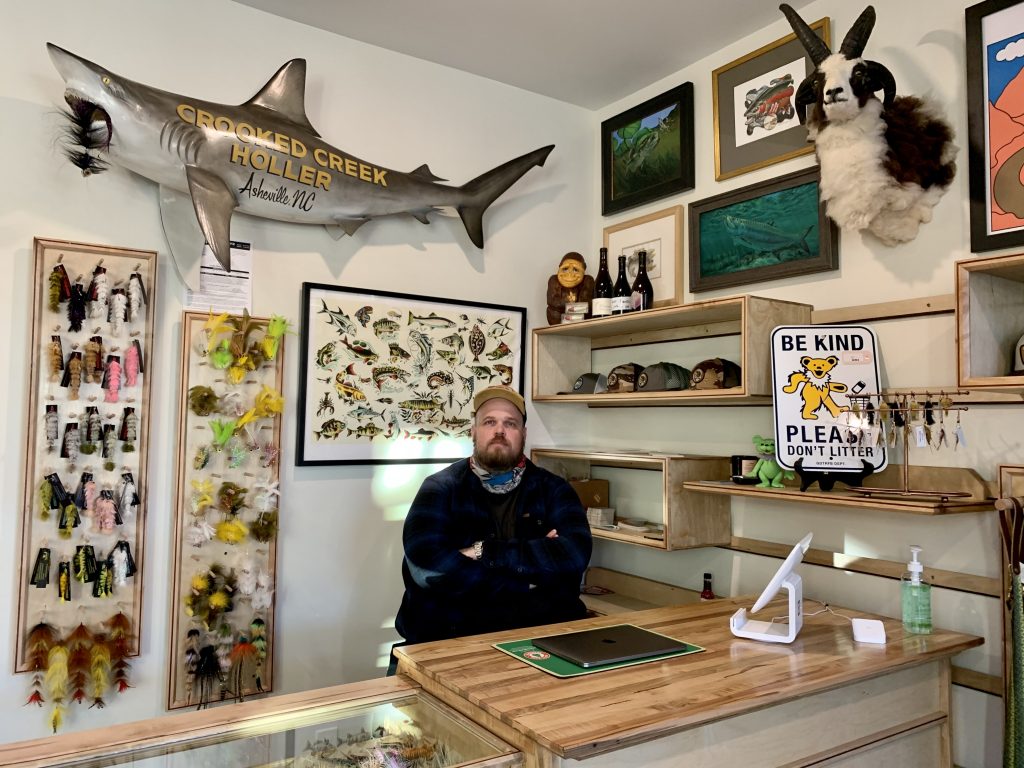 Local tattoo artist Danny Reed has opened Crooked Creek Holler, a shop in West Asheville featuring clothing and gear for anglers and folks who enjoy the outdoors. Along with his own designs for T-shirts, hats and stickers, Reed has curated gear made by boutique craftspeople, such has handmade fly rods and clothing sewn by an artist/embroiderer using a 1930s chainstitch machine./ photo by Jason Sandford

Danny Reed is better known as a tattoo artist than an angler in Asheville and beyond, but Crooked Creek Holler, a new fly fishing shop he recently opened, may change that.

Reed opened Crooked Creek Holler last month in Suite 101 of the new mixed-use building at 257 Haywood Road in West Asheville. It contains a curated collection of handcrafted goods and gear designed specifically for people who like to fish, and more generally for outdoorsy folks. (Located in the Beacham’s Curve section of Haywood Road, Crooked Creek Holler is about a mile from his Hot Stuff Tattoo shop, which he opened in 2009.) Jon Moore handles shop transactions with Reed.

“That’s my favorite band, and I”m just a huge fan,” he says. For the graphic designer in Reed, it doesn’t hurt “that they have the best visuals of any band in existence, in my opinion.”

One shirt design by Reed, “Trouts Under the Stars,” is a play on the album cover design for “Cats Under the Stars” album released by the Jerry Garcia Band in 1978. Another Reed design reimagines the Grateful Dead’s famous red-white-and-blue skull emblazoned with a lightning bolt, which served as the album cover art for the bands live, 1976 double album titled “Steal Your Face.” Reed’s design features a curved trout atop the skull’s crown. 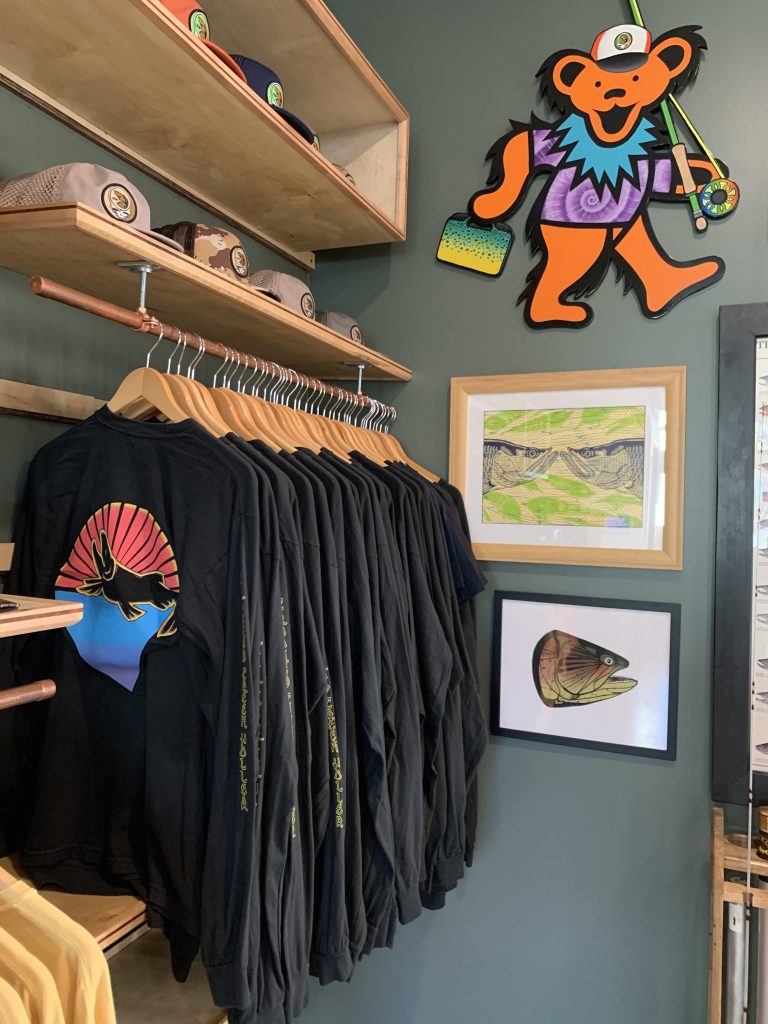 The Grateful Dead is the favorite band of Asheville artist and angler Danny Reed. That influence comes through some of Reed’s designs and artwork for his Crooked Creek Holler brand of outdoor wear./ photo by Jason Sandford

The idea for the brand started nearly 10 years ago, says Reed, when he celebrated his 30th birthday and realized that he’d spent nearly his entire adult life inside a tattoo shop. “Even vacations,” he recalls. Reed needed balance in life, he says, and that desire led him to spending more time outside. He reached out to people experienced in hunting and fishing, and took time to learn.

“Through all that, I realized that a lot of the clothes and gear didn’t appeal to me,” Reed says, noting his own “counter-culture background.”

Hunting gear looked  trashy to Reed’s eye, and he found most fly fishing gear had a buttoned-up, conservative feel. “That doesn’t speak to me, so I saw that maybe there was a niche to fill, where I could make stuff for people like me, who grew up like me.” Reed says his aesthetic is inspired by music, pop culture, other artists and the outdoors.

Reed launched Crooked Creek Holler with a T-shirt and sticker in 2014. He named his brand after the Crooked Creek area of Old Fort in McDowell County, where he purchased his first house. He distributed his first Crooked Creek Holler designs through Hunter Banks Fly Fishing, Asheville’s longtime fly fishing shop catering to anglers (the shop, which first opened in 1985, is celebrating its 35-year anniversary this year.)

The brand blew up, surpassing Reed’s expectations, so he decided to open up a brick-and-mortar spot. In building out the shop, Reed turned to craftsmen and artists he knows or has bought from in the past.

He turned to Corvus Wood Company in Asheville to build the shop’s beautiful wooden shelves and display units. He hung his paintings of fish from the walls, and sells prints. (Reed will only create designs of fish that he’s actually caught himself.)

To stock those shelves, Reed gathered American-made goods and gear that he trusts; much of it is made by folks that have become friends over his years as an outdoorsman. They include one-of-a-kind, hand-built fly rods by Shane Gray of Graywolf Fly Rods in Michigan. Crooked Creek Holler is one of few, if not the only, retail location for Greywolf, according to Reed. The flies Reed sells are tied by local and regional fly tiers, with many that are larger streamers, rather than the smaller dry flies. 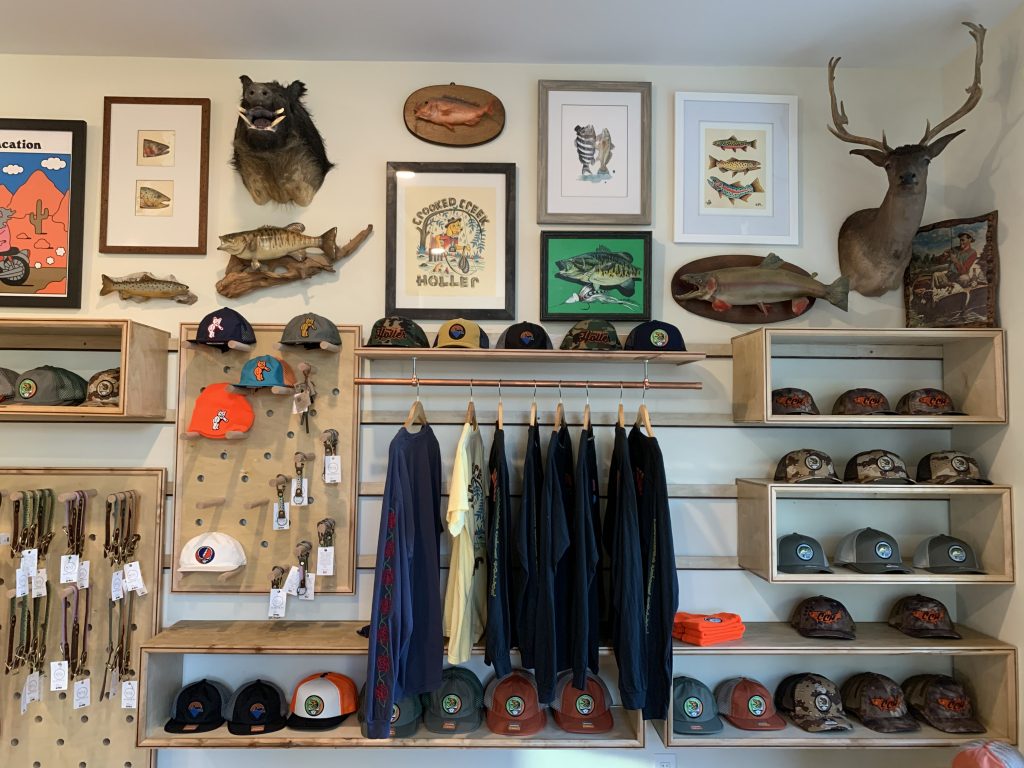 Crooked Creek Holler, a new shop featuring everything from handmade fly fishing rods and flies to T-shirts and caps, has opened on Haywood Road in West Asheville. The shop is the work of Danny Reed, who’s perhaps best known as a tattoo artist at his Hot Stuff Tattoo shop, which is also located in West Asheville./ photo by Jason Sandford

Crooked Creek offers hats and clothing by Pumpkinseed Chainstitch, a New York-based company that makes one-of-a-kind items using a 1930s chainstitch machine. There are bags by Vedavoo, another boutique maker, as well as small-batch, handmade leather goods by Montana-based Whiskey Leatherworks. Reed, an avid knife collector, specializes in unique knives, made regionally or from small European makers. For a funky, limited-run T-shirt design, Reed reached out to a fellow tattoo artist, Dan Santoro, who is also an angler.

The items can cost more than shoppers might initially expect, Reed says. But he’s got a goal in mind: “to help educate people about not under-valuing art.” Reed’s business model is one where “everyone involved feels like they’re being compensated properly for their work.”

That can be tricky at times, he says, because for so long, artist have accepted less than what their work is really worth, something Reed admits he’s done in the past. But if something is well-crafted, it’s worth the extra cost, Reed says. And if he can keep those dollars circulating locally, all the better, he adds. “I feel like I’m funneling my money locally.”