whatshouldavlcallme: How to survive the Zombie Apocalypse in Asheville

Here we go again – the third installment of the ongoing collaboration between Ashvegas and the popular whatshouldashevillecallme. Known for their quippy, hilarious takes on all things Asheville,whatshouldashevillecallme was voted the most popular local social media personality in the recent Best Of issue of the Mountain Xpress. Follow wsavlcallme on the twitters.

How to Survive a Zombie Apocalypse in Asheville

Since the zombie walk is not happening this year, don’t you worry, I got your zombie fix right here! Have you ever imagined what would happen if the zombie apocalypse happened in good ol’ Asheville? Would you be alert and on the move with your prepared weapons? Would you sluggishly get up  from the couch and trip on your bong and Cheetos as you try to escape? Would you try to start a grassroots movement to protest their rights as individuals at Vance Monument? It’s all up to you! I need to clarify one thing: zombies mean actual flesh eating walkers of the undead, not your friend named Ryvre and his crew who cannot move after a few bong rips. Now here is the ultimate guide! 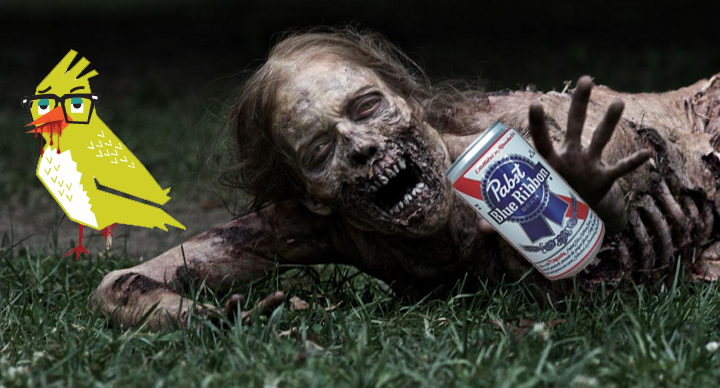 1. The Biltmore Estate: The largest private American home in the country = extra hiding spots with a touch of pretentious history!

Cons: the wine, the large windows make it hard for boarding up, possible bitchy Vanderbilt ghosts,  and it reminds you of 2003 when you took your parents visiting for Christmas in which they wore holiday sweaters and made you take pictures next to every historical artifact (true story…)

2. The Grove Park Inn:  Ghosts! Celebrities! 7 dollar Bud Lights! But it may be also useful to set up shop inside during the zombie takeover of 2014. Let’s discuss:

Pros:  Delicious gourmet foods, tons of rooms to take shelter (except for room 545!), spa for relaxation (you can finally afford it!), so much liquor inside (cleaning wounds and drankz)

Cons: Ghosts (How many supernatural forces do you have to put up with? Ugh!), some nerd in your group keeps ranting off historical facts of Grove Park Inn (we get it, so many Presidents have stayed here),  slow old people from Florida visiting, and in a surprising turn of events, the beds are just not that comfy

Cons: nerds in your group debating if Walt Disney actually had an office here,  kinda boring after 20 minutes, SO. MUCH. YARN, the portico market is just inviting those zombies who just loooovvvve buying local

1. Use your old sun/lion/flowers/Garcia tapestry from college to cut up and make bandanas (hide your face from blood AND patchouli scents!)

2. Hybrid bike for roads and mountain trails, fast getaways! Spandex outfits are encouraged, but nothing flashy you party road bikers you!

3. The 8 million Nalgene and reusable water bottles you have collected through the years are your new best friend

4. The  combat lace up boots you ironically wear throughout the year are now not so ironic and your life depends on it

6. You already know you can almost successfully go without a shower for a few days, so hippies, you got this one!

7. Beards can also hold necessary tools: toothpicks, sticks, screwdrivers, and even depending on the length, a PBR can

8. Use that expert Asheville knowledge of how to get from N to W to S to E on all the backroads, now is the time!

9. You would think flannel shirts would be good for surviving this, but they are not. Don’t ask.

10. I would immediately try to get to Burial Beer, not for the delicious beer, but for all the weapons already displayed on the wall

You now have to think about the band of survivors you trust and who to get rid of.  Does Sunshine slow you down because of her hippie rants about still preserving the environment? Does Brosef of Arden keep attracting walkers due to his bright and sparkly TAPOUT shirt? Time to pick one of the teams I have carefully assembled for you. Let me know in your comments which one you choose!

Team 1: The Hipster knows all the back alleyways throughout downtown but lacks experience in anything remotely useful for survival, and truthfully, his skinny jeans are cutting off his circulation, though he would rather die than admit it. Yet, we have The Kayaker who is the strongest, as he/she has the upper body strength to guide the team with sexiness as well as their keen sense of direction. Oh no! The Hippie Mama Homemaker is there as well. Although very talented in her crafting abilities, her constant jabbering about still remaining gluten-free holds back the team. (Hey, it’s post-apocalyptic Asheville, gluten-free doesn’t exist anymore) and surprisingly, the smartest in the group is The 8-Year-Old  city charter student named Trey Anastasio Jr., who can identify every poisonous insect east of Appalachia  but gets crabby when his juice box isn’t 100% organic and from Greenlife.

Team 2:  Within this team, we will start with the strongest: The Outdoorsy Backpacker, whose whole life has been leading up to this moment. Even though he knows moss grows facing north, his beard is growing way south and beginning to smell really bad. The Busker is here too! Use his saw not for making fun campfire songs but for also actually building that campfire.  Another member of this team is the 42-year-old Homebrewer Dad, with his trusty beer gut and Chaco’s, but won’t let you fill his growlers with water until the last drop of Rocket Girl is gone. Alas, the last member of this team is The Warren Wilson College student, eager to put all those service learning hours to good use, but won’t shut up about still recycling for whatever the future might hold for Asheville.

So what team do you choose? Leave a comment below!  Hope you make it alive and this guide helps you for when this all actually happens on Sept. 23, 2014, exactly at 4:20 PM. And for the love of God, keep Carl in the fucking house.

Biltmore to host Chihuly glass sculpture exhibition May through October 2018