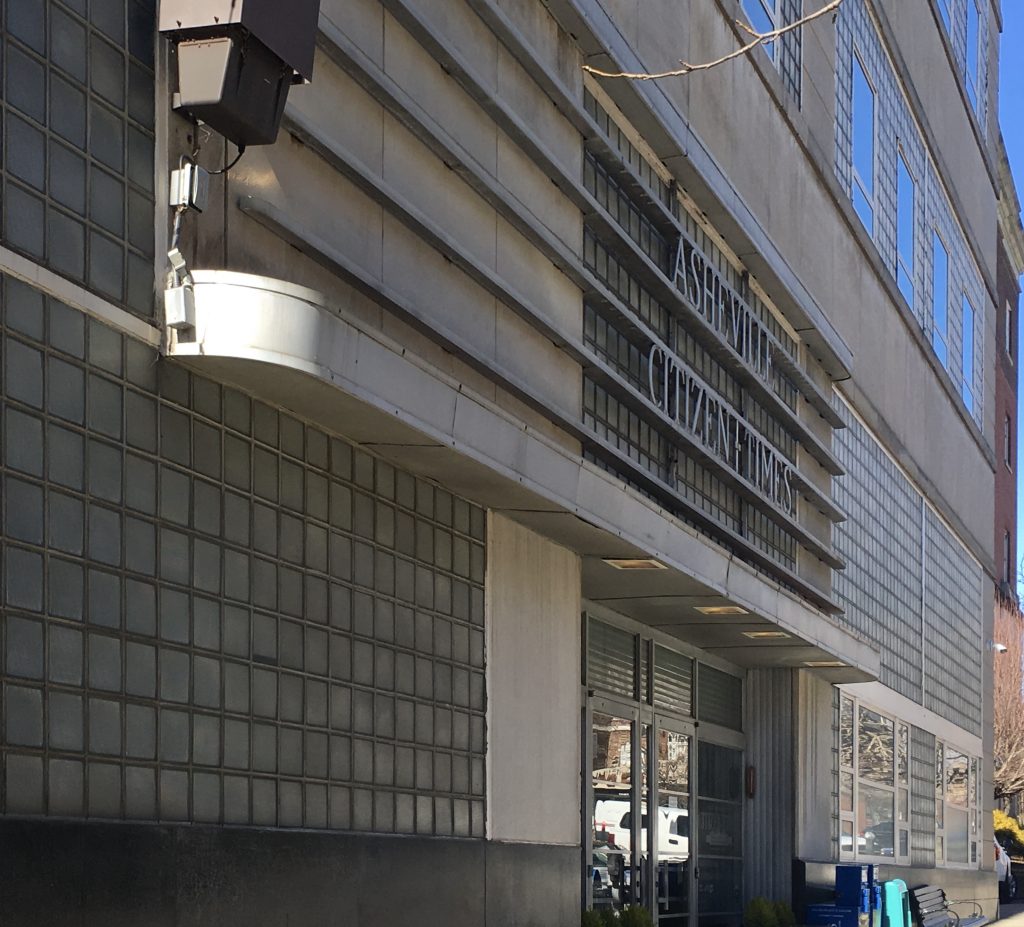 The former Asheville Citizen-Times building on O.Henry Avenue in downtown Asheville will be the new home of Citizen Vinyl, a vinyl record manufacturing facility./ photo by Jason Sandford

Founded by veteran music producer Gar Ragland and supported by a team of industry professionals and craftsmen, Citizen Vinyl is set to become North Carolina’s first on-site pressing plant. Ragland is aiming for a September opening.

Ragland has set up shop in the former station’s Studio A where he continues in his roles as music producer and mixer, label head of NewSong Recordings, and organizer and co-founder of the internationally recognized NewSong Music Performance & Songwriting Competition. As Citizen Vinyl’s first official tenant, Ragland has reinvigorated the space into a fully operating music studio that, in addition to hosting private recording, mixing and mastering sessions, will be used for tracking future Citizen Vinyl in-store performances that will then be released as limited edition vinyl, according to a news release.

“It’s a once-in-a-lifetime opportunity to bring this historic studio back to life, and to be able to work in a space with such deep history,” says Ragland.

In addition to its former life as home to both the Asheville Citizen and Asheville Times newspapers(and then the combined Asheville Citizen-Times, which continues to lease space on the building’s second floor), the building’s third floor played host to Asheville’s historic WWNC (“Wonderful Western North Carolina”) which was once considered the most popular radio station in the United States. In 1927, the station hosted live performances by Jimmie Rodgers (“The Father Of Country Music”) shortly before he went to Bristol, Tennessee and made his first recordings. In 1939, the station featured on its Mountain Music Time segment the first live performances ever by Bill Monroe and the Bluegrass Boys, the aggregation that marks the beginning of Monroe’s creation of a new sound called “bluegrass.”

With a craft-first approach that prioritizes quality and superior customer service, Citizen Vinyl hopes to make record production more manageable and accessible for both first-time vinyl clients and major label customers alike. With all shipping and manufacturing kept in-house, Citizen Vinyl will be able to fulfill low-volume orders at a budget friendly price and still maintain the bandwidth to execute large scale label projects, according to the news release.

Citizen Vinyl’s vision extends past vinyl manufacturing and includes a role as a community hub and center for creative collaboration. Sharing the ground floor with the presses will be a fully-stocked record store, an intimate performance and lounge space and Session, a bar/cafe co-created by local culinary mainstays Susannah Gebhart of OWL Bakery and Graham House, formerly of Sovereign Remedies.

The dining space will offer Citizen Vinyl visitors a casual, “workman’s lunch” or pastry and coffee stop during the day, with more sophisticated cocktail offerings and dishes at night. Intended to be a multi-use space, Session guests may choose between communal dining in the open concept seating area, or a “head down,” eat-and-work hour. With vinyl as the soul of the project, a creatively curated and historically acute selection of records will provide the soundscape for the bar/cafe and record store from morning to night.

“We’re thrilled to be part of the team bringing life into this singularly distinctive space in Asheville — it’s going to offer an atmosphere unlike any other,” Gebhart says, “at once grand and playful, inspiring and relaxed. The menu will be inspired by the legacy of the space as a working press, and pay homage to this region’s contributions to the world of music and food.”