VIDEO: What to do around Asheville on New Year’s Eve weekend 2016

If you’re feeling anything like we are about 2016, you’re ready to wave goodbye and turn over a new page. This New Year’s weekend, we’ve got a list of the hippest and most happening things in the area, which are guaranteed to send you into the future with a bang. We advise you to rest up Thursday and Friday so you can meet 2017 head on. Be sure to check out our full New Year’s Eve roundup post, which includes these events and more, on Asheville Grit!

Salvage Station always knows how to throw an unforgettable party, so you can bet their New Year’s Eve bash will be no different. The event features live music from Santos Glocal Soul from 7-9pm, Laura Reed from 9:30-11:30, and will round out the evening with dance party music from DJ Dr. Get Right. Don’t miss the champagne toast at midnight. $8 advanced, $10 day of

The Grey Eagle party features two Asheville favorites: the fun, funky Yo Mama’s Big Fat Booty Band with rockers The Broadcast. The doors open at 8 p.m. and the show starts at 9 p.m. 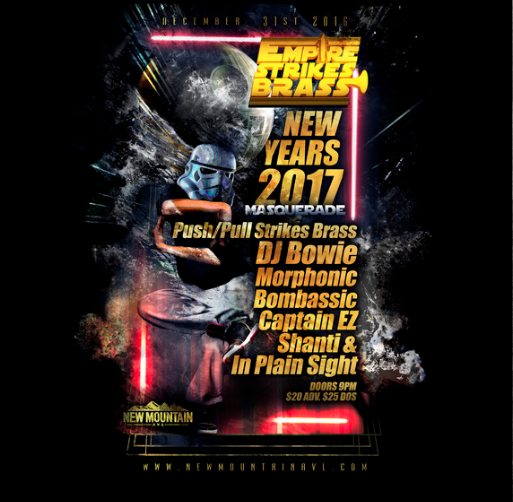 New Mountain AVL is hosting Empire Strikes Brass at their New Year’s masquerade, just in time for the band’s new album, “Theme for Celebration,” to drop in February 2017. DJ Push/Pull will be performing with the band to add a certain electronic aspect. Also in attendance: Morphonic, BomBassic, Captain EZ, Shanti, and In Plain Sight. $20 advanced, $25 day of

Taleb Kweli needs no introduction. He’ll be performing at The Orange Peel with RBTS WIN and Mike L!ve on NYE, in case you want to ring in the new year with a legend. $30 advanced, $35 day of

No better way to ring in the new year than looking back at past years. Celebrate 2017 with a good old-fashioned 90s party at The Burger Bar. Dress up in your best 90s gear for a chance to win a prize, chow down on bison burgers, and toast with champagne at midnight.

The word’s out at this point: Buxton Hall knows how to throw a party. Who can say no to a photo booth with free prints? Featuring music from Devyn Marzuola, Mary Kelly, Alex Cartwright, and Chef Sarah Cousler, ranging from Go-Go to disco to “booty music,” there’s sure to be something for even the grinchiest of New Year’s Eve celebrators. $5.

9 years of Saturday night dance parties at West Asheville’s beloved Admiral end this weekend, so go show your support for this long-standing Asheville tradition. They promise “the stupidest, go-for-broke dance party blowout this town has ever seen.” We love you, Admiral dance parties!! 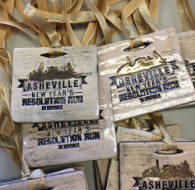 Start your year right with the third annual New Year’s Resolution Run. The race will kick off in Pack’s Square at 10am (so you don’t have to tuck in too early the night before). There will be cash prizes, as well as locally made pottery awards. $35, discount if you register with 3 or more

Kick off your new year with a bike ride through one of Western North Carolina’s most beautiful and extensive state forests. Participants will leave from Lake Imaging parking lot at 10 am sharp.

Refresh your book shelves with 25% off ALL ITEMS at Malaprop’s. This isn’t just books, folks. Think big: notepads, moleskins, games. Surely the place to fill out those Christmas gifts that were “late in the mail.” Don’t miss it.