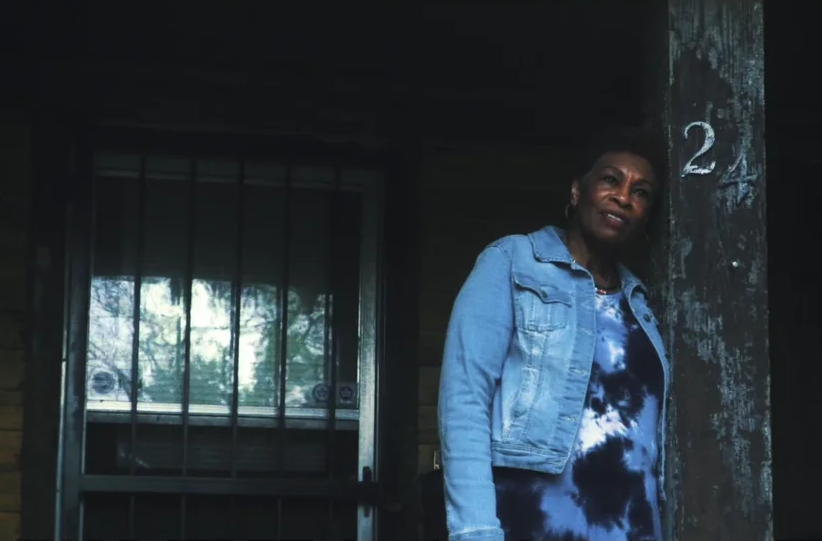 Asheville native Dianne Gambrell, shown here, collaborated with singer-songwriter Anya Hinkle for the song “Struggles,” which they hope will guide discussions about the pursuit of racial justice in Asheville.

Editor’s note: This is the first in an ongoing series. Through the song “Asheville Struggles,” written by Asheville resident Dianne Gambrell, local singer-songwriter Anya Hinkle, videographer Gen Kogure and Ashvegas plan to dig deeper in to Gambrell’s stories through a series of monthly vignette documentaries and articles. The hope is to further a conversation about the continued pursuit of racial justice in Asheville. “These are the kinds of stories people need to hear, things that happened right here, and that are still happening,” says Hinkle.

Two West Asheville neighbors with deep musical talents are teaming up to keep attention focused on the local fight for racial justice.

Moved by the death of George Floyd at the hands of police last year, Dianne Gambrell wrote a song called “Struggles.” She shared it with Anya Hinkle, her friend and neighbor from just a few doors down, and a unique musical collaboration was born.

Gambrell is an Asheville native from the historically Black Southside neighborhood, a career nurse and mother of four who is also a lifelong singer and musician. Hinkle is an award-winning Americana singer-songwriter and music artist.

“We sat down over coffee and talked about Floyd’s killing, and the protests afterward. She told me she had written a song called ‘Struggles’, so of course I had to hear it.”

Gambrell, 69, opened up about what it was like growing up in a segregated Asheville. She talked about how the so-called “urban renewal” movement ripped the fabric of her neighborhood, displacing friends and family into housing projects scattered across the city. Gambrell herself was relocated and lived as a teen mother while managing to enroll in nursing school. She went on to work for 40 years at Mission Hospital.

”Struggles come in different forms, not only racially, but financially, educationally, and from generation to generation, “ says Gambrell. “There are many things that can burden a person down.”

Floyd’s death hit close to home for Gambrell, who says her thoughts immediately went to the death of her mother’s brother, who as a 5-year-old was killed when he was hit by a drunken driver while playing on the sidewalk. The driver, who was white, was never charged in connection with the incident.

Gambrell says the boy called out to his mother for a glass of water just before he passed away. “When my grandmama returned, he was dead,” she said. It was a scene reminiscent of Floyd calling out for his own mother before he died.

The “Struggle” video shows Gambrell pausing and reaching down to the sidewalk at that very spot on Livingston Street. “There was a crack in the sidewalk until just a few years ago where that happened,” she says.

After their meeting, Hinkle and Gambrell decided to fully produce the song. Hinkle set up a guerilla-style recording studio in her backyard with an emphasis on keeping people safe and distanced due to safety restrictions around Covid-19. And Hinkle called upon her musician friends to join in — Grammy-nominated fiddler Casey Driessen; DeShawn Hickman on pedal steel; and Wendy Hickman on back-up vocals.

Hinkle invited them to come over, meet with Gambrell and add their parts, which were later mixed by sound engineer David Arnold. For the music video, Gambrell took videographer Gen Kogure to the most significant spots: her Livingston Street neighborhood, her church and her school.

Gambrell hopes the song sparks a conversation about change that will bring the community together.

“The change we need here is to give people a real chance to succeed. People need to feel accepted and recognized and included,” Gambrell says. “My goal is to draw people into a conversation that can be the beginning of making change.”

Hinkle agrees, adding that music can be fantastic force for change.

“People want to know how they can make a difference, how they can create real change. With this song, we want to tighten the focus onto our community and encourage people to look here, right here in Asheville” Hinkle says.

“Dianne has seen so much injustice, has endured so much bitterness and hatred, but remains one of the most positive people I’ve ever met,” Hinkle adds. “She has this beautiful smile that draws you in because of the depth of her heart.”

The overriding guidance, for Gambrell, “is that if we continue to show deep love for each other, that love covers a multitude of sins, and when we do that everyone will look the same.

“Love is greater than anything and love accomplishes all. That’s it.”

Asheville Struggles: A crack in the sidewalk and a cry for mama
Jason Sandford February 23, 2021

Hello, Asheville! Here’s another Food Feed for you. The words and pictures below were originally posted to social media, mostly …
Read More

Editor’s note: This is the second in a series aimed at continuing a conversation about the pursuit of racial justice …
Read More

STU HELM’S FOOD FEED Hello, Asheville! Here’s another Food Feed for you. The words and pictures below were originally posted …
Read More