Cat Fly Film Fest is throwing the second-annual Cat Fly Halloween in collaboration with New Belgium Brewing in a few days. In anticipation of the event, which is a celebration of “all films strange,” we sat down and talked to creative director Madeleine Richardson and festival director Brittany Jackson to get in the inside scoop.

So tell me how this crazy project started.
Brittany Jackson: Madeleine and I all worked on a movie called “Good Hair” that was shot in Atlanta. It was a short film, and when we finished production, they decided to take it on tour through the Southeast. We were like, “You guys are awesome, you should totally bring it to Asheville and we’ll set up a screening and do the work and we’ll screen the film.”
Madeleine Richardson: After that, it snowballed into an entire weekend. Brittany called me in the middle of winter while it was snowing outside and was like, “Come to Waffle House, I have this idea! What if we just made a film festival?”

Great ideas are born in Waffle House!
Brittany: Totally! [laughs] We didn’t know if anyone was going to come, but we figured it would be fun either way.
Madeleine: The very first Cat Fly was a weekend at the Magnetic Theatre, Habitat Brewing, and Trade and Lore Coffee. We sold out! Which was amazing, like actually unreal. It was so cool. Our entire goal was just to break even, and we made it all back plus some, enough to do Cat Fly Halloween that October at Upcountry Brewing. The venues were so receptive, and the community came together. This year, Cat Fly Halloween is screening at New Belgium Brewing. They are so incredible to work with. Everyone is, really. Especially when you pitch your mission of creating a platform for indie filmmakers by indie filmmakers.

Which is cool, because I’ve heard complaints sometimes about the art scene here being kind of cliquey.
Madeleine: I think once you create an inclusive space, people will inevitably show up. Brittany and I met at the 48 Hour Film Festival, and I stayed in that group for awhile before we started Cat Fly. I heard so many people talk about future collaborations at Cat Fly, which feels really incredible. That social piece, it’s a huge part of what we do. It’s also really important for us to keep ticket prices and submission fees low to accommodate micro filmmakers who don’t have a million dollar budget for making films.
Brittany: Yeah, when it comes to collaborating, I think it’s important to connect on a personal level first. We usually do an hour of mixer before the event so people can get to know each other, talk about what kinds of films they like, that kind of thing. Once you know you like someone, that’s when the real work begins.

Was that social component part of the original mission, or did it naturally evolve over time?
Brittany: I think it was always there. I volunteered in the music scene a lot in Greenville, North Carolina, which is where I grew up. It was just something I did because I really love seeing live music, being at shows, and it was a very connected music scene. It was called the Spaz Community. Everyone just supported each other, and it was so easy to access artists. Touring bands would come through and everyone would just hang out and get to know each other. I studied film in college. It’s my art form, I can’t play music. [laughs] But that DIY feel from Spaz became something I wanted to bring to the film community later down the road.

Madeleine: Yeah. A lot of film screenings are cool, but you just go, watch a feature, and leave. We wanted it to be more of a social, collaborative experience than that. Short films kind of lend themselves to that too; because they’re short, you can easily take breaks between films to do other stuff. It’s a huge part of what we do, creating that environment that’s almost like a music festival. We’re really unique in format.

Did either of you have any prior entrepreneurial experience to bring to the table, or was this a deep dive into the unknown?
Madeleine: Brittany worked in the music scene a lot. And I had experience volunteering at music festivals like LEAF and Shakori Hills, really small grassroots stuff. But the business side is a whole beast of a situation that we’re learning. I’m like, “why didn’t I go to business school?” I mean I know why I didn’t… [laughs] A.B. Tech has a lot of awesome resources for small business. And The Mechanical Eye is amazing. They’re a local nonprofit that focuses on uplifting teen filmmakers that identify as female or genderqueer. They’ve helped us out a lot. We met the people who run it at the Female Filmmaker meetings. We want to become a nonprofit, but it’s so expensive to apply.

How much?
Madeleine: Eight hundred dollars. And then they can just reject you! Asheville has some of the most nonprofits per capita, which makes it difficult to get certified. Right now we umbrella under another a nonprofit until we can get our own status set, which is really important. Everything we make goes back into making more events, and you’re so much more likely to get good rates for venues and sponsors if you’re a nonprofit.
Brittany: We’re just waiting until we can get our ducks in a row before we apply, because we only have the money to apply once. We have a few sponsors and donors, like Asheville Screen Printing. They do all our step and repeats and our merch.
Madeleine: We have some really cool Halloween merchandise. Matt Decker, who’s this really great artist, designed the shirts. He’s a friend from the print shop. He’s done stuff for the Flaming Lips, Dinosaur, Jr., Built to Spill, Dr. Dog –
Brittany: And Tame Impala!
Madeleine: Yes! Tame Impala. It turned out better than I could have imagined. We had some ideas, but he just took it to a whole other level.
Brittany: When I opened the PDF, I almost screamed.

What does your super ultimate, fantasy dream Cat Fly look like?
Brittany: Right now, my dream is an outdoor event with a giant stage, and bands playing between films where people can camp out like they do at a music festival.
Madeleine: I really want to do a rooftop pool party screening with a DJ. I’ve had that in my head for the longest time. We’ve also talked about doing a kinky Cat Fly. Like late night, you need a password to enter, maybe a scavenger hunt to find it. Another idea we’ve talked about is taking Cat Fly on tour.
Brittany: I know so many musicians who have gone on tour. It seems so amazing. I want to do that.

As filmmakers, what is your favorite genre to create?
Brittany: Horror, definitely. It’s so fun to play scared, pretend, and spill blood everywhere. The lighting is really cool.

What do you use for fake blood?
Brittany: Corn syrup and cocoa powder? Madeleine knows more than I do.
Madeleine: Powdered sugar, water, cocoa powder, and red dye is one recipe. There’s a ton though, that’s just the one I use.

What can people expect from Cat Fly Halloween?
Madeleine: It’s a costume, dance party, and screening. The first 50 people in get a drink with their ticket, and there’s going to be cool lighting and cool decoration.This year we have nine short films that get stranger and stranger as the night goes on. It’s going to get freaky! After the screenings, we’ll have a dance party, because it’s fun. Everyone loves a dance party! Then we’ll probably head to a bar in the River Arts District for an after party. It keeps that music festival vibe going.

Cat Fly Halloween will be held at New Belgium Brewing at 7 p.m. on Friday, October 12. Tickets are available at their website.

This interview has been edited and condensed. 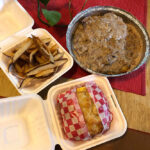 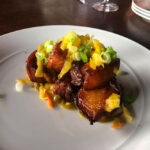 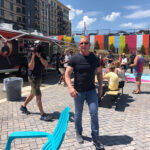 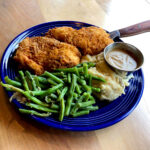 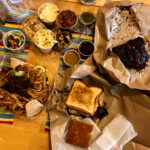