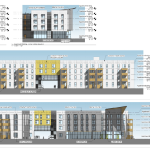 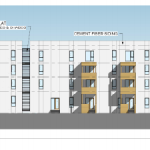 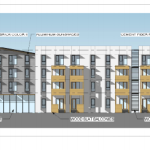 Here’s a first look at architectural plans for Lee Walker Heights in Asheville. Lee Walker is the city’s oldest public housing complex, having opened in 1950 on Short Coxe Avenue.

The plan is to move out residents (about 200), demolish the 96 units at the current complex, and build a new housing complex on the same Wilbar Street location. The new construction will include town home units and other mixed-income, mixed-use development. The Asheville Housing Authority, the city of Asheville and Duke Energy are coordinating efforts on this major South Slope redevelopment.

There’s also been discussion about building the new Lee Walker Heights on the former Matthews Ford dealership on Biltmore Avenue. Duke Energy owns that site. So far, plans are still in the discussion stage.

The hope is to start construction on the new Lee Walker sometime this year, but nothing’s confirmed.

Thanks to loyal reader Gary for the heads-up.

Editor’s note: This is the second in a series aimed at continuing a conversation about the pursuit of racial justice …
Read More

STU HELM’S FOOD FEED Hello, Asheville! Here’s another Food Feed for you. The words and pictures below were originally posted …
Read More