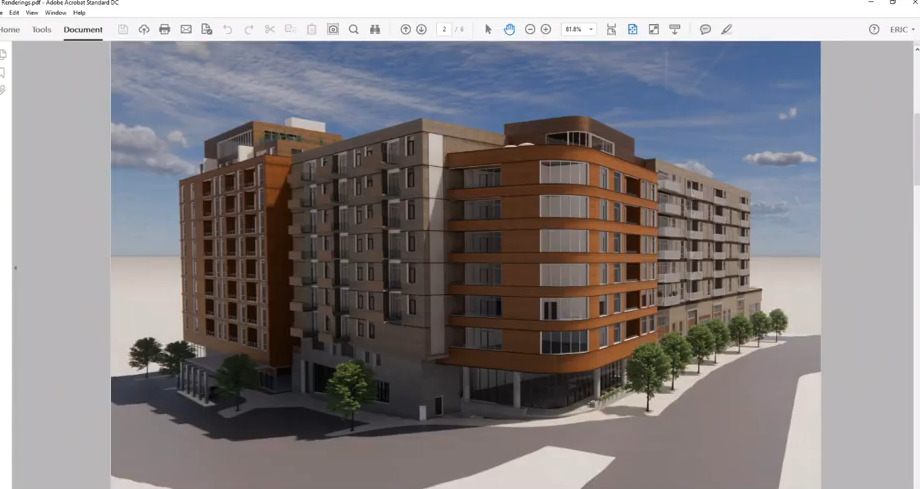 An architectural rendering of a proposed mixed-use development on Woodfin Street in downtown Asheville. It was presented by an MHAworks Architecture team to members of the Asheville Downtown Commission’s design review committee during an online meeting Wednesday. An Earth Fare grocery store is proposed for the ground floor of the curved building on the corner, with Woodfin Street running along the right side of what’s show here.

The architectural team working on a proposed mixed-use redevelopment of a hotel site in downtown Asheville delivered an update on its design plans for the project during a Wednesday morning meeting.

The mixed-use development would add about 90 condos, 54 apartments, a 145-space parking deck, rooftop restaurant, retail space and an Earth Fare grocery store location to the Woodfin Street site that’s now home to the Four Points by Sheraton hotel. The mixed-use buildings would be built around the hotel, which will remain. The residential buildings would be 10 to 12 stories tall, and some would have green roofs.

The update was made to the Design Review Committee of the Asheville Downtown Commission. The members in attendance during the online meeting were: Stephen Lee Johnson, Robin Raines and Bryan Moffitt. Asheville city planners Sasha Vrtunski and Shannon Tuch were also in attendance. 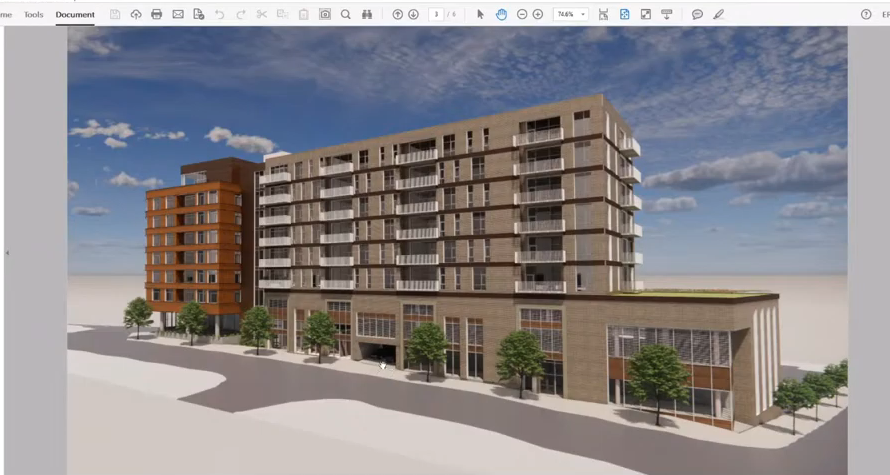 An architectural rending of a proposed mixed-use development on Woodfin Street in downtown Asheville. A team from MHAworks Architecture in Asheville made a design presentation to the design review committee of the Asheville Downtown Commission on Wednesday. This rendering shows what the buildings would look like along Woodfin Street. An Earth Fare grocery store would be located on the ground floor at the corner at far left; the main building shown here is a condo building, with retail spaces along the ground floor.

Wednesday, team members Peter Alberice, Cyd Jaggers and Eric Powell said they’d added more detail regarding key design elements such as the building materials they plan to use. Those elements include masonry and metal panels for the skin of the buildings, as well as EFIS and some manufactured masonry. (EFIS stands for “exterior insulation and finish system,” and is a cladding system that provides exterior walls with an insulated, finished surface. The use of EFIS on some past downtown Asheville building projects has caused issues with the EFIS styrofoam-like shavings falling like snow onto streets and getting washed away with rain run-off.)

Other issues discussed Wednesday include: where ground-floor building space along Central Avenue could be activated to be more pedestrian-friendly; whether there’s enough on-site parking for all the proposed uses; and whether on-street parking could be added to the section of Woodfin Street that runs in front of the project site.

Formal building plans have not yet been submitted to city of Asheville planners. Once they are, the project will go before the full Downtown Commission for a vote, which serves as that body’s recommendation to City Council. It will proceed to the Asheville Planning & Zoning Commission for a vote, which is another recommendation to City Council. Then the project goes before City Council for a final decision.

Johnny and Jesus in the clouds

The Beer Guy told this story the other night at the Westville: Well, I’ve seen Johnny Cash in concert. Let …
Read More

As you can see from below, I am only barely half normal. Which I think is good. Clink on the …
Read More

I love Sophia’s joy. You see it here, in the pure unmitigated happiness of flight, or at least the closest …
Read More

They sound familiar. The coppery tones of the Go-Gos. The chirpy rap of Blondie. Funky strains of the B-52s. It’s …
Read More

Each year about this time, the Eastabunny comes out to play. It started a couple of years ago as just …
Read More

I can’t believe Baretta is walking a free man tonight. Does anyone really believe that he DIDN’t do it? Dominic …
Read More

The day the earth stood still

It’s that time of year again. Time for the madness of the march to the Final Four – the NCAA …
Read More

Dook takes care of its own

If you haven’t been keeping track of the water wars, you need to check out this story of the e-mail …
Read More

DaisyI know the weather is going to be rainy and cold this week, but at least I’ll have the memory …
Read More

When a new friend, who was visiting from another country, asked me, “Why Ashvegas?” I had to pause for a …
Read More

Wanna be a sheriff?

It’s an open secret in Ashvegas that its top lawman is ailing and considering stepping down. As with any elected …
Read More

Rashad, we’re pulling for you and your mom

I’m still worried about what ails Rashad. Because it’s as much about what’s in his head as it is anything …
Read More