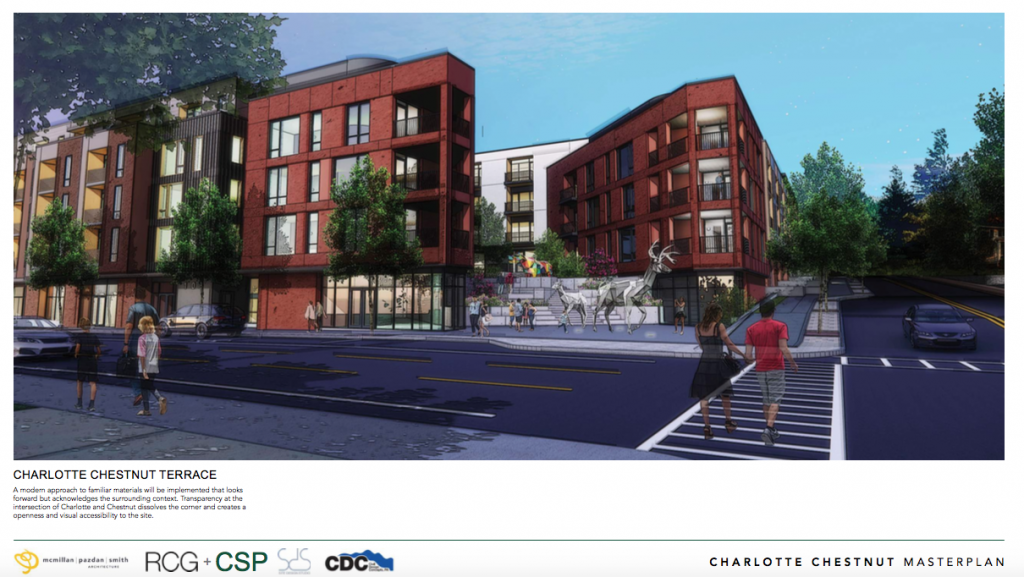 This architectural conceptual rendering shows what the corner of Chestnut and Charlotte Streets (the corner across Charlotte Street from the former Fuddrucker’s restaurant) could look like under a mixed-use development proposal that’s in the works. The proposal calls for 194 new residential units on the 6-acre site, as well as 30,000 square feet of new office space and 20,000 square feet of retail space./ Courtesy of Hume Killian

A  proposal for a mixed-use development at the corner of Charlotte and Chestnut streets just north of downtown Asheville would bring 194 new residential units, 30,000 square feet of office space and 20,000 square feet of retail space to a 6-acre plot that’s part of a local historic district.

Asheville native Hume Killian is part of the ownership group of the property, which his father, the late Dr. John H. Killian, amassed during his years working as the region’s first retinal surgeons starting in the late 1970s. (His practice was located on the site.) Dr. Killian, who bought several other properties in the Charlotte Street neighborhood, was also a preservationist who won awards for his work to restore the Tennent /Pritchard House and the Von Ruck House there. Hume Killian says the proposed redevelopment plan makes the most economic sense for his family and represents a forward-looking design that fits with the area, as well as his father’s vision of a vibrant neighborhood.

The project calls for the removal of several old structures on the site, including 13 homes that are part of the larger Chestnut Hill Historic District, which is listed on the National Register of Historic Places. That designation does not come with regulations regarding the renovation or removal of buildings – there are no rules barring that for this district. But the Preservation Society of Asheville and Buncombe County says those homes, which date to 1900 or later, should be preserved, and it has rallied residents to speak out against the project.

Hume Killian took oversight of the properties after his mother, who managed and maintained the property following her husband’s tragic death in a car wreck on South Charlotte Street in 1998, decided she was ready to step away in 2016.

Killian teamed up with the Boston-based real estate investment firm RCG as part owner, and brought on McMillian Pazdan Smith Architecture, which has designed a number of projects in Asheville, including a large mixed-use development between Coxe and Asheland avenues on the South Slope, as well as the new Lee Walker Heights public housing complex under construction.

“We’re not rolling in here to throw up a monster building,” Killian said last week during a socially distanced presentation at the downtown offices of McMillian Pazdan Smith Architecture.

Three mixed-use residential buildings and one mixed-use office building would be built on the site under the proposal, as well as 30 to 40 new townhouses, according to the presentation by architects Lindsey Rhoden and Peyton Shumate. The Asheville Arms Apartments, also located on the site, are gradually being renovated and will remain.

Rhoden said the design team aimed for an innovative, holistic design that wouldn’t overwhelm the neighborhood, took design cues for other important area buildings and drew in pedestrians by offering connectivity across the site. Other important aspects of the design include a sidewalk along Charlotte Street that measures 25 feet wide once room for landscaping, pedestrians and building frontage is added up, as well as an open, terraced walkway at the Charlotte/Chestnut street corner that would invite in pedestrians and serve as a gateway for the neighborhood.

The project offers the architects “a thrilling opportunity to be a catalyst for smart growth” in the neighborhood, Rhoden said.

The Chestnut Hill Historic District was listed on the National Register of Historic Places in 1983. From a regulatory standpoint, there are no restrictions for property owners when it comes renovating property, according to the development team’s attorney, Wyatt Stevens of the Asheville law firm Roberts & Stevens. The district’s main advantage for property owners is that it affords tax credits to those who wish to renovate property to the high standards of historic renovation, he said.

The old homes that the Preservation Society wants to be saved are old – built in 1900 or after – and have been divided up into variously sized apartments over the years. Some of the house have fallen in to disrepair. To fix them up would potentially cost millions, Stevens added. One of the houses was designed by famed architect Richard Sharp Smith, known for his work on the Biltmore Estate and Biltmore Village, but Stevens said there are many other better-preserved Smith buildings around Asheville. And while Dr. Killian did win recognition from the Preservation Society for work restoring other homes, he did tear down other old structures in the neighborhood and did not have a plan to save the houses on the proposed development tract, both Stevens and Hume Killian said.

The Killians could borrow money, receive tax credits and fix the properties up, Stevens said, but their future use would be limited to either million-dollar single-family residences or fancy commercial property. That doesn’t make economic sense for the Killians, he said.

The redevelopment plan does, and it fits with the city’s Living Asheville Plan for the Charlotte Street area, Stevens said. That plan envisions development of a safe, walkable neighborhood that retains its connection to the natural landscape and features thoughtful, equitable development. “Ours is the same vision,” he said.

Stevens went on to point some of the project’s other highlights: 10 percent of the residential units, or 19 units, would be offered as affordable housing at 80 percent of area median income; the development team would commit to hiring minority-owned business enterprises to work on the project; the development would add to the local tree canopy through the planting of approximately 130 more threes than exist there now;

“At the end of the day, we think this is the best use of that property,” Stevens said.

Killian, emphasizing his father’s decades as a steward of neighborhood properties he owned, added: “Our goal has always been to make Charlotte Street a better place.”

The Preservation Society of Asheville and Buncombe County disagrees. In a social media post in October following a meeting with Killian, the organization alerted followers of a “demolition threat!” The organization stated that it believed “the block can be revitalized to include businesses like restaurants, shops and offices along Charlotte Street, rehabilitated single family homes and even some new higher density housing, all of which would add vibrancy to the Charlotte Street corridor while contributing to the neighborhood’s sense of identity and authenticity by preserving these historic assets.”

Formal plans have yet to be submitted to the city of Asheville for consideration. Once they are, they’ll be reviewed by the Asheville Planning & Zoning Commission before ultimately coming to City Council for a final decision on the developer’s conditional zoning request.