“If David Brent could see me now…”
(Warner Bros. Pictures)

Review by The Isolated Moviegoer:

There won’t be a more brisk 169 minutes at the movies this year than Peter Jackson’s The Hobbit: An Unexpected Journey.  An enchanting blend of elements familiar and fresh, the first of three installments comprising J.R.R. Tolkien’s beloved novel is a rousing success and puts to rest any concerns surrounding the director’s return to Middle-earth.

Ain’t no party like a dwarf party.
(Warner Bros. Pictures)

Occurring 60 years before the events of The Lord of the Rings, we revisit the Shire where hobbit Bilbo Baggins (Martin Freeman, an inspired casting choice) enjoys a daily quiet existence.  That peace is soon disrupted by the wizard Gandalf (Ian McKellan) and a dozen dwarves, who overtake his home, empty his pantry, and feast in his dining room.  Having seen the long-foretold portent of birds returning to the Lonely Mountain, the short bearded men, led by Thorin Oakenshield (Richard Armitage), have united to take back their kingdom of Erebor from the pillaging dragon Smaug.  In need one more member to complete their team, Gandalf suggests Bilbo as their “burglar” on the merit that dragons are unaccustomed to the smell of hobbits, thereby making him a valuable asset.  Though hesitant to leave his simple life, Bilbo eventually gives in to the coaxing and joins the ensemble on their quest.

In establishing the mission and throughout the group’s trek, Jackson rolls out an array of character development wrapped inside thrilling adventure, so that even when the tale appears to pause for a breath, its energy and intrigue remain high.  Hunted from the start by the orc warrior Azog (Manu Bennett), a horrific pale giant of a beast dedicated to ending Thorin’s family line, danger is ever present.  The film isn’t without levity, however, evident in the dwarves’ jovial brotherhood and most successfully in Radagast the Brown (Sylvester McCoy), an eccentric wizard of Gandalf’s order who’s gone a bit comically mad in his isolated care for woodland creatures.

In the words of Paulie Bleeker, “Wizard.”
(Warner Bros. Pictures)

The central story is plenty engaging, but what makes An Unexpected Journey truly great is its ability to blend these elements with that of a separate and greater underlying dread, one of a slowly growing ancient evil that will set the stage for The Lord of the Rings.  It is in Radagast’s forest rounds that the wizard notices first signs of death and decay, extensions of dark magic originating from the nearby abandoned fortress of Dol Goldur.  Traveling to the structure on his amusing but speedy rabbit-drawn sled, he encounters an entity capable of resurrecting the dead, a figure he dubs the Necromancer (Benedict Cumberbatch).  Shaking Radagast to his core, the unexplained menace’s threat is so great that it inspires an impromptu council in the elf city of Rivendell, attended by none other than Tolkien VIPs Lady Galadriel (Cate Blanchett), Lord Elrond (Hugo Weaving), and the wizard Saruman (Christopher Lee).

“How did you get this through customs?”
(Warner Bros. Pictures)

With Gandalf already serving as an effective bridge between Jackson’s linked sagas, the sight of additional familiar faces (and several places) raises the stakes beyond a mere homeland reclamation, enjoyable as the dwarf adventure may be.  The presence of these key figures hints at more worldly consequences in play, and with knowledge of their respective actions in Tolkien’s subsequent trilogy, the excitement derived from connecting the dots is a staggering asset.

Saruman’s dismissal of a reawaken evil carries a frigid foreshadowing, yet no recognizable figure elicits quite the charge of Gollum (the untouchable Andy Serkis).  His game of riddles with Bilbo, in the murky crevices beneath a subterranean goblin city, is the film’s true centerpiece.  Pulsing with palpable tension and gleeful bursts of humor, the dialogue is an engrossing battle of wits, with an over-his-head Bilbo (Freeman at his best) rising to match Gollum with his own distinct trickery.  By remaining with the two for the duration of their exchange and milking it for maximum captivation, however, the film spends so much time away from the dwarves that when their strand resumes, it makes for the film’s lone clumsy transition.  A necessary evil, Jackson & Co. brush off the awkward cut by plunging quickly back into the action as if the dwarves’ parallel predicament was never abandoned.

At these peak moments, familiarity doubtlessly works its magic, though despite that quality, the mere narrative structure of An Unexpected Journey threatens to deflate its suspense entirely.  Recounted by an elder Bilbo (played, as he was in the trilogy, by Ian Holm) six decades after the tale occurred, his unquestioned survival would appear to remove all sense of danger when his safety is in jeopardy.  Also seemingly problematic are the general look and feel of Middle-earth and the film’s storytelling style, analogous to that of the Rings trilogy.  With nearly all of his technical collaborators returning, the potential for lulling audiences into a slumber of deja vu is certainly present, but the expert entertainer that he is, Jackson works in enough innovation to make his latest Tolkien chaptertruly distinct.

Like all great reunions, each tried element is comforting yet fresh nine years after Return of the King, from Howard Shore’s new pitch-perfect score to Weta’s magnificent special effects.  As for the script and performances elicited, there’s the sense that Jackson purposefully refined some of his trilogy’s more awkward qualities to improve the overall experience.  The use of subtitles is a pleasant addition, never stranding the viewer on a language barrier ledge, as is a more mature sense of camaraderie among characters.  Though the dwarves are largely indistinct at this point, their interactions are bereft of the precious juvenilia that occasionally dogged hobbit relationships in the trilogy.  There’s no doe-eyed stares of endearment to be had among these warriors, nor from Freeman’s charming but brave Bilbo, by far the most enjoyable hobbit performance in either saga.

The true leap forward, however, is in the visual department.  Embracing technology developed since his first dance with Tolkien, Jackson’s employment of standard 3D is fine and adds a nice depth to the picture, but cannot compare to the visual thrills of his much-maligned 3D 48fps version.  By presenting images at twice the normal frame rate, an unparalleled degree of clarity and smoothness emerges, depicting characters nearly as they would appear in person, with only a slight hyper-real gleam.

New as the approach is, however, it has yet to be perfected.  The increased frame rate requires some initiation (the opening scenes feel as if someone is tapping Fast Forward and the visual starkness oddly resembles a BBC program) and extremely fast movement by cameras or characters cause a distracting level of speed, almost to a blur.  But for the vast majority of shots, including complex action sequences, the technology offers a truer 3D experience and images so crisp that it makes every other film look fuzzy by comparison.  Similar to the edge an HD television broadcast holds over standard definition,though even more impressive, it’s nonetheless worth seeing a 24fps presentation first to experience the story on a traditional level, then revisit it in the faster frame rate to more fully devote oneself to the exceptional visual enhancements.  With so much going on narratively and visually, the 48fps makes for a challenging yet rewarding initial viewing, but for anyone wishing to remain on the cutting edge of cinema and encounter a wholly original time at the movies, here’s the opportunity.

Despite a decade away from Middle-earth that yielded mixed results, The Hobbit: An Unexpected Journey not only suggests that Jackson is at his best in the grand fantasy realm, but that only he can deliver entertainment on so grand a scale.  There hasn’t been an epic of this magnitude or one that’s produced this level of entertainment since The Lord of the Rings concluded, and while there have been many pretenders, apparently only Jackson can do it this large and impressively.  Boasting a flow so nimble that the ending feels sudden, halting something so engaging that it’s nearly sinful, the film is so light of foot that another 169 minutes at its pace would have been welcome.  That’s excellent news for the second film, one that, with increased exposure to faster frame rates and refinement in its administration, could very well eclipse the brilliance of this spectacle.

The Hobbit: An Unexpected Journey is currently playing at the Carolina Cinemas on Hendersonville Rd. and in 48fps at the Regal Biltmore Grande. 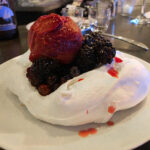