A group of six artists is collaborating a giant, four-walled mural inside the Salvation Army Boys & Girls Club on Haywood Road. The Atlanta-based artist PaperFrank, who has his first Asheville show coming up next month, gave me a heads-up about it last week.

When I dropped by Tuesday afternoon, Asheville artists Dustin Spagnola, Megan Kelly, Ishmael, Jeremy Russell and Jon Graham were all hard at work. (PaperFrank) had painted his part last week.) The black-and-white mural is a mixture of styles and subjects. There’s an owl, a sea turtle, a skateboarder and a crowd-surfacing Kurt Cobain. And more.

Spagnola told me the idea is to do something to make the enliven the room, and for the artists “to do something nice for the kids, give them something they want.” It should be done relatively soon. The next step is to paint a mural on the center’s outside wall, Spagnola said. 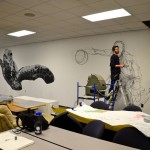 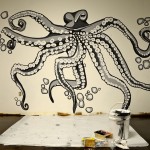 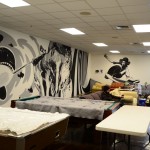 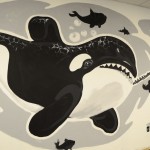 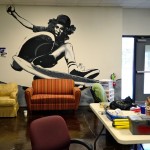 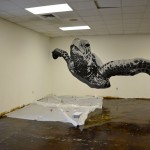 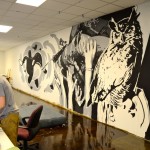 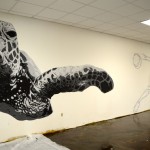 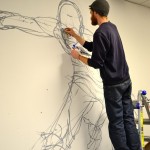