Emergency crews were dispatched to a building collapse at 15 Carolina Lane with possible subjects trapped at approximately 2:30 p.m. today.  Crews arrived on the scene to find that the two story, vacant structure had endured a pancake collapse. Fortunately, the two contractors who were thought to have been in the building at the time of collapse had actually not been at this location for several days. Fire personnel did search the building to ensure there were no victims.  Adjacent buildings to the collapse have been evacuated and Public Works is working to secure and re-open the public roads as quickly as possible. Utilities to the affected buildings have been shut off.  There are no reported injuries at this time. For further information please contact Kelley Klope at 828-768-1437.

EARLIER THURSDAY:A building on Carolina Lane collapsed in downtown Asheville this afternoon about 2 p.m. The building sits on the downtown lane and above Bouchon restaurant’s private dining room, a room that is in a separate building at the back of the popular French restaurant. The building was vacant– it was most recently home to a sound studio–and there were no injuries that I’m aware of.

Asheville fire officials say demolition work had been underway inside the building for about the last week.

People who heard about the collapse on Facebook gathered in a courtyard that was strewn with bricks from the collapsed building to get a look at the damage.

The Lexington/Walnut/Broadway is closed. The immediate area remains unsafe as of Thursday afternoon, according to the Asheville FD. 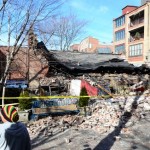 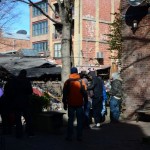 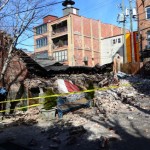 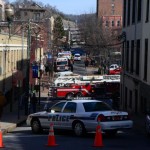 This Asheville livecam is focused on the collapse area: Asheville LiveCam North View